CICS is a transaction procession system owned by IBM and runs under Z/OS operating system. CICS stands for Customer Information Control System which works as a front end for the business applications written in COBOL, PL/1, C, C++, Assembler, PHP and JAVA but most of the applications which CICS supports are written in COBOL. CICS controls the interaction BTW Users and Applications by providing a secure multi-user platform. It supports Multi threading which is a
useful concept for multi user environment where multiple users can perform the same operation but with different set of input data. CICS is widely used in Banking, Telecom, Insurance, rail Roads and many more business applications.

In CICS terms, Task is an instance of one transaction. When any transaction is initiated, a task gets created by OS and processes the data/input provided by the user/terminal. It gets ended once the processinf is completed.
Tasks that are being executed can be viewd in the native CICS using the Master Termincal Transaction (CEMT).
CEMT INQ TASK(task id)

is a feature of OS where Multiple tasks can execute simultaneaously. CICS supports mulitasking.

A reentrant program does not modify itself when it is reentered after an interupption by the OS. This is possible as in Pseudo conventional program, a task gets ended without waiting for the user input and after the input is received, it gets started (reentered) from that point only. This is called reentancy.

Where as in non conversational programming ,After the program receives input from user it process, sends response and ends the task. It wont expect any more input from the user. It only contains one response from the user.

In Conversational programming once the program sends response to the user it waits for the user response, here the task doesn’t end. So the wait time and resource usage will be more with conversational tasks. The storage required for these are very high, as it holds all the resources until that task ends. 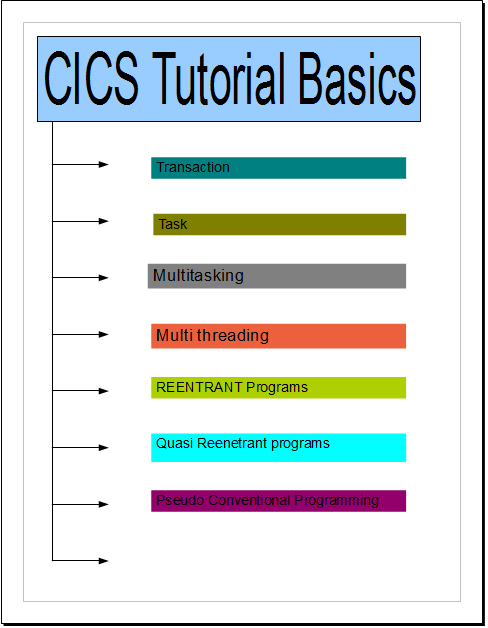